Plymouth Lord Mayor’s Carol Service took place this evening at the Minster Church of St. Andrew. Whilst it was raining outside, inside the warmth of the glowing candles, which had been lit from the Peace Light from Bethlehem delighted.

Candles lit with the Peace light from Bethlehem.

The Lord Mayor, Michael Wright was accompanied by the Deputy Lieutenant of Devon, the High Sheriff of Devon and the Recorder of Plymouth.

The collection from the well attended congregation will go to support the Lord Mayor’s Charity Fund, Parkinsons UK.

St. Andrew’s Choir sang a range of Christmas songs and the organ was played by the Assistant Organist Jeremy Clark.

The church was decorated with a tall Christmas tree, flowers and a nativity arrangement. 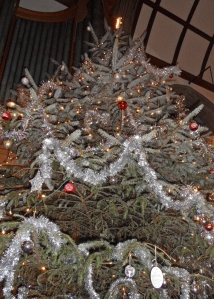 Music Of The Night

Music of the Night The Royal Citadel, Plymouth Hoe Monday 16 to Friday 20 July 2012

Music of the Night began in 1992 to commemorate the re-dedication of the Royal Citadel after its refurbishment. With a cast of hundreds of local amateur singers and dancers of all ages and the professional musicians of the Royal Artillery and Her Majesty’s Royal Marines, the final production of Music of the Night will be hosted by 29 Commando Regiment Royal Artillery in celebration of the unit’s fiftieth anniversary, with profits from the performances donated to local and military charities.

For more information visit the Music of the Night website.

Music of the Night
Image: http://www.teamarmy.org